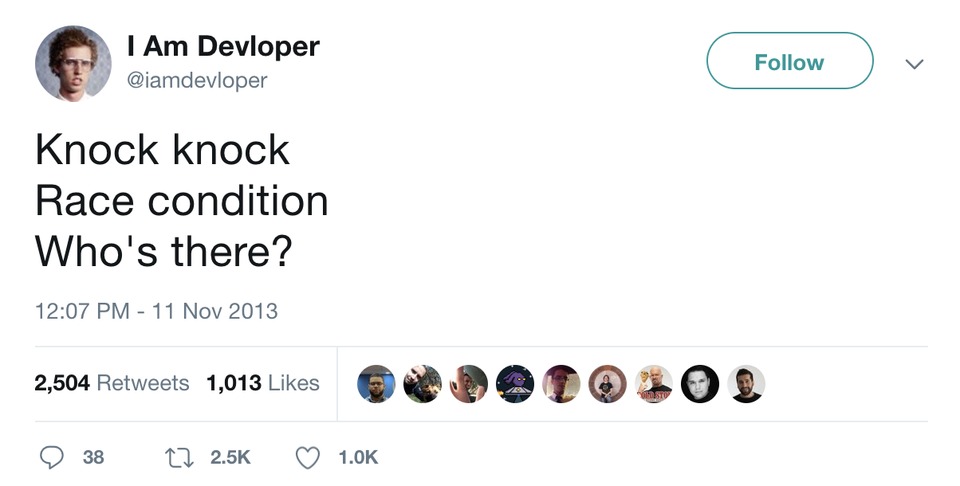 Race conditions are not that old. They are very widely available much more than you might think they are. While we do see that they have not made it in the OWASP Top 10, if there were an 11th Position, I think that place would be perfect to rate their severity. While most of the frameworks now a days have inbuilt capability to handle them, programmers often neglect some areas where the appropriate locks have to be implemented. Wait! What!?.. What’s a lock? In-order to understand the RC, we first need to understand the working of a large application in a multithreaded environment. Let’s just learn about it in very brief. Let’s understand this with a small example:

Assume that there is a small website that allows signing-up users. At the registration, the users are prompted to enter their username, password and desired email address. Once the user clicks on the sign-up button, they are allowed to sign-up to the website. When the user tries to signup again, s/he can’t use the same email address or the same username again. Why do you think that is the case? That’s probably because username/email_address is the entity that is used by the web application to uniquely identify it’s users. In a sense, we can probably say that there can be only one user for one username. We can very vaguely link this to the one-to-one cardinality of our Database Management System Concepts. Now the question here is, what if there were to be more than one user somehow in the database with the same identity? If the username, is used as a primary key in one table, we know that there cannot be more than one primary key in a table! So, if somehow we manage to get more than one primary key in a table, what do you think happens then? This is where RC comes. Oh! btw, during the course of writing this, I may casually switch between race condition and RC so don’t get alarmed.

In one of my tweets, I asked people:

Here is a pole to make things easier

Ignoring the silly spelling mistake, I was surprised at this ratio. Given the fact that the issue is so widespread and not so many people are testing for it, I decided to write this article about some of my findings in race condition. I am no expert at this, whatever I am sharing comes through learning, and I am still learning.

For this, we are going to extensively rely on Turbo Intruder. Its an amazing tool by James Kettle (@albinowax). If you have not read his research yet, I recommend you check it out as it will probably give you quite a lot of insight to the current issue here. Now turbo-Intruder is a great tool, it implements it’s own network layer TCP stack which allows it to send multiple requests per second. This is much higher than the traditional Intruder that comes with a Pro license of Burp. Although it has a small learning curve to it, it’s worth it. For the past few months I can’t remember a single day, I have not used Turbo Intruder atleast once while hunting for bugs. So, the way it works is, you have to be specific about a request that you think could probably create a race condition. Select that request and send it to turbo intruder.

Once the request is in the Turbo Intruder, we will use the following script to create race-condition:

Over the course of all the examples, that I’ll demonstrate we make small modifications to this script to achieve our goals.

This is an amazing bug that describes one such place where most of us would have never thought about looking it. In this creative find, my friend Yash Sodha @yashrs found that if a team member joined a group once on ctf.hacker101.com they could not be removed even by group leaders. For some background, once a group is created on ctf.hacker101.com, the group leaders can onboard other group members by sending them invitation link. The invitation can only be used once. Once the invitation is accepted, it cannot be used again, Yash realised this and tried to create a race on the /group/post_join endpoint that accepted the group invite along with his session tokens and invite parameter.

You can read more about it here.

Now this is perhaps the most common use of race-conditions, While hunting on one of the targets, I noticed that one of the very well known e-commerce website allowed their user’s to apply coupon code to provide discount. Now, it is evident that once coupon can perhaps be used only once, so I decided to test this out. Using the same script mentioned earlier, I sent about 10 requests race-condition requests to this endpoint. But nothing happened. I was kind of expecting this since since the website was heavily tested and was pretty well known.

After a while, I received an update from the program managers stating that the race condition someone tried, created a deadlock within their customer’s database. This was astonishing. I tried to navigate to their website, and learned that it was now impossible to add a coupon. A database lock essentially prohibited all the customers from purchasing anything from their website.

Here is the response when a customer tried to proceed to checkout:

Since the testing was in production environment, I decided to report it to the program. Upon realizing the fact that I was the one who created this deadlock, they gave me a warning and banned me from their program stating that DOS was explicitly OOS.

Sometimes I don’t get these programs, this was a database level DOS which created a critical impact on availability. I am pretty sure that a blackhat would probably have not stopped to read and adhere by the terms and conditions of testing. Whatever!

The current issue is perhaps one of the issue that is highly under-appreciated. Initially discovered by @dor3s and reported to the internet, basically breaks the one-to-one correspondence between a single authorization_code and an access_token. How does it work? Inorder to understand this we need to understand the OAuth 2.0 Authorization Model and specifically the Authorization Code Grant. You can read about it here. A few conditions that are required here:

If these conditions are met, you can test for Oauth 2.0 Code -> AT/RT exploit.

Let’s understand this with a case study.

When I learned about this attack vector, this was the first application that I tested which turned out to be vulnerable. Reddit allows you to register an OAuth application to authenticate users. I registered an OAuth 2.0 Application on their website at https://www.reddit.com/prefs/apps and followed their documentation at https://github.com/reddit-archive/reddit/wiki/oauth2. Roughly here are the steps that I followed.

Using one authorization_code a malicious application was able to obtain more than one AT. This behavior doesn’t pose any immediate risk since the user himself decided to authorize the application. But consider this. What if the user wanted to revoke the malicious application’s access from his account? Reddit has provisions made for that as well. You can navigate to https://www.reddit.com/prefs/apps and simply de-authorize an application.

This issue was also highlighted in the report submitted by @dor3s to the internet. Basically, unlike the above code -> AT/RT race condition, we create a race to obtain multiple AT/RT with a single RT. The authorized application sends a request something like this:

According to the finder, a race condition found here is even more serious because once a code is obtained, it can perhaps be used only once to obtained multiple AT/RT pair. However, if the RT is able to obtain multiple AT/RT pairs, then that can be used any number of times to generate new pairs. The situation get’s worsen when the access to the resource server is persistent inspite of de-authorizing the application. Here is a blog by @dor3s himself that explains about this issue in a little more depth.

As the title mentions, this issue was discovered in one of the well-renowned social media platforms. The ability to increase the followers and likes by creating RC. Unfortunately, I cannot disclose this report since the current issue has not been mitigated yet. But trust me, if you look for any place where it is possible to do a like or subscribe or upvote or follow. Try RC there. You will be surprised how many of such applications are vulnerable to this. Here I’d like to add one thing. While testing for this bug, make sure you also test on mobile endpoints. In this case, my friend Yash (@yashrs) had already found most of the endpoints vulnerable to RC however, after a little bit of research, I learned that although all the endpoints of Web-application were reported, the Mobile Application was still vulnerable. So, I went ahead and reported them right-away

.​ Later the program declared RC as OOS (which was sad).

This one is the most interesting bug that I recently found and played a crucial role for me tweeting about RC issue. While assessment on one of my targets, I tried the classic-old coupon trick that I described above, but it didn’t work out well. However, this time I tried one more trick. I modified the above python code to something like this:

In this case, I created 3 different accounts and used a single coupon (which was only one time use) to these 3 accounts and was successfully able to reach to their payment gateway. At this point it was enough to demonstrate the severity of the report and the report was acknowledged by the program managers.

Some other articles on RC

There isn’t any specific way of fixing an RC issue. In case of multithreaded applications, it is essential that we rely on locks before we get into critical section. However a lot of things have to be considered even while applying locks. An improper implementation on thread locking can lead a sequence of locks from which the application may not be able to escape. This situation is called Deadlock as explained in the above classic old coupon trick. Moreover, it has to be kept in mind that the locking mechanism should only be implemented on the critical section. So, defining the boundaries of critical section is one of the most important aspect. If the critical section is large, it will significantly impact the performance of the Web Application.

The C and Go use mutex locks for putting a lock. They are pretty simple and easy to use and can be implemented easily after reading a little bit of documentation.

There is a limit to the content that I can write in a single blog. I hope you guys liked it. Do let me know in the comments how you felt or if you have any doubts, DM me on twitter on Milind Purswani or @panda0nair.

Special thanks to Vishal Panchani @vis_hacker and Yash Sodha @y_sodha for reviewing and proofreading the content.